Even though gambling has been prevalent in America long before it ever became the United States of America, it is still an activity that actively divides people into two main categories – those who are for it and those who are against it. 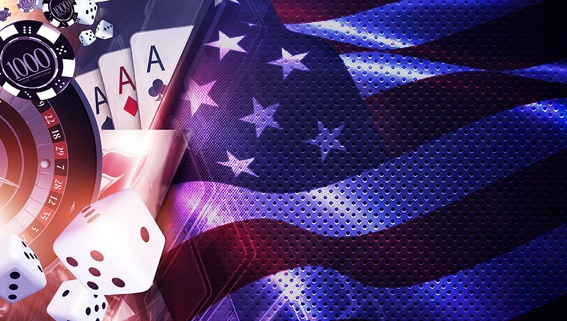 Regardless of your personal opinion, one thing is for sure; gambling in its various forms – including online gambling – is here to stay. As proof of this, an increasing number of states are getting ever closer to implementing pro-online gambling legislation, just as Nevada, New Jersey and Delaware have already done.

On this page, we’ll discuss the current state of online gambling affairs on a federal and state level, as well as which states seem close to legalising and regulating online casinos within their borders.

A History of Online Gambling in the United States

The first online gambling sites were launched in the mid-1990s and unsurprisingly players from the US were amongst the first to try them out. Pretty soon thousands of US players were spending hours on end playing at a wide variety of online casinos, poker rooms and bingo halls that were springing up all over the internet like wildfire.

These remote gaming sites allowed US gambling fans to play real money games on their PCs or laptops all from the convenience and privacy of their homes, day and night.

However, the more popular online gambling became, the more concerned US authorities were becoming. They were worried about the lack of regulation of this popular remote or virtual form of gaming, the impact they were having on the country’s long-established land casinos, and the millions of dollars in revenues lost to offshore online gaming firms.

This concern turned into action in 2006 when Congress slipped through a piece of legislation that was signed into law by President George W. Bush called the Unlawful Internet Gambling Enforcement Act (UIGEA), in an attempt to stop Americans from gambling online.

To summarise, UIGEA specifically “prohibits gambling businesses from knowingly accepting payments in connection with the participation of another person in a bet or wager that involves the use of the internet and that is unlawful under any federal or state law.”

As a direct result of UIGEA, the majority of online casinos and other remote gambling sites experienced a marked drop in player numbers and subsequently stopped accepting players from the USA. A few operators continued to accept US players, but with dire results.

One such operator was popular online poker room, PokerStars. With most of its rivals no longer accepting US players, it soon became the world’s #1 poker room. That all changed, however, on April 15, 2011, a day is forever known as ‘Black Friday’ to igaming fans.

On that day, US authorities seized and shut down the poker room’s website (and those of a handful of other online poker sites also still accepting Americans) for violating US money laundering as well as federal bank fraud laws, as well as various other charges.

The domain was only returned to PokerStars after it paid $225 million in ‘restitution’ to the DoJ in August 2012. The poker room was relaunched in November that same year. Black Friday served as a warning, however, to gaming firms to stay clear of the US and its players.

It should be stressed again, however, that despite the long reach of UIGEA, it doesn’t affect US players who exercise their right to gamble online, whether at licensed online casinos (if they live in regulated states) or at offshore-owned sites. The right to choose is solely theirs.

UIGEA may have been the end of the regulated US online gambling story if not for the Wire Act of 1961.

Also called the Federal Wire Act, the Interstate Wire Act of 1961 is a federal law prohibiting certain types of betting practices in the US. It came to the fore in September 2011 when the US Department of Justice (DoJ) published a legal formal opinion on the reach the Wire Act.

This contended that interstate transmissions of wire communications unrelated to sporting events or contests, don’t fall under the Wire Act. In other words, the Wire Act expressly prohibits online sports betting but no other forms of online gambling – including online casinos, bingo rooms or lotteries.

The DoJ ruling on the wire act (which was upheld by the US Fifth Circuit Court of Appeals) gave the individual US states the right to choose whether to legalise, regulate and tax their own online gambling industries or not, as opposed to the federal decision.

Although the Wire Act of 1961 ruling was made in 2011, you may be surprised to learn that as of September 2017, online gambling has still only been legalised and regulated in three out of America’s 50 states, with two other states cautiously poised to follow suit.

Below you’ll find a summary of the online gambling laws in each of the currently regulated states – Nevada, New Jersey and Delaware – as well as an update of the two states that may soon be regulated –Pennsylvania and California:

Called ‘The Entertainment Capital of the World,’ the desert town of Las Vegas has attracted gambling fans from the US and abroad since the 1930s. But in February 2013 it entered a new and exciting gambling realm with the passing of Nevada Assembly Bill 114.

Designed to open the way for the legalisation, regulation and taxation of online gambling (currently limited to online poker) in the state, Bill 114 has given Nevada the authority to enter into interstate compacts (agreements between two or more American states) to offer online poker to players 21 or older.

Bill 114 also secured Nevada’s place in the history books as the first US state to approve interstate online gambling. Ironically, it was partly due to pressure from the major Nevada land casino resorts that the Unlawful Internet Gambling Enforcement Act was passed.

To date the Nevada Gaming Commission has only approved and licensed to online poker operators – Real Gaming and the World Series of Poker (WSOP). That said there are no laws in Nevada that prohibit players from signing up at any offshore online gambling sites.

New Jersey’s online gambling journey has been a long one that bore fruit in January 2011. Then a bill was passed allowing online gambling by local residents 21 or older on casino sites solely hosted on servers kept on the actual premises of licensed Atlantic City land casinos.

However, concerned that the legislation – which allowed for gaming on any internet-enabled computer – might be used by commercial businesses such as internet cafes and nightclubs to become lucrative online gaming hotspots, New Jersey Governor Chris Christie quashed it.

To address Christie’s concerns, new legislation was drawn up prohibiting any NJ businesses other than land casinos in Atlantic City from advertising or offering online gaming facilities. As a result of the changes, the new bill was signed into law by Christie in February 2013.

This marked the start of New Jersey’s new legalised and regulated online gambling industry overseen by the New Jersey Gaming Commission. By the end of that same year, there were 9 licensed online casinos in operation. To date the Garden State has 17 licensed casinos:

The state of Delaware’s journey into the world of remote gambling was cemented in June 2012 when the Delaware Senate passed the Delaware Gaming Competitiveness Act of 2012 (HB333). It was signed into law by Delaware Governor Jack Markell shortly thereafter.
The Act amended the Delaware’s existing gambling laws to allow the Delaware State Lottery to offer residents of the state certain online gambling platforms such as online casinos and poker rooms. It also makes allowances for interstate gaming via an interstate compact.

The compact opens the way for gamblers residing in other licensed and regulated US states (such as Nevada + New Jersey) to access any of Delaware’s three licensed online casinos – Delaware Park Online, Dover Downs Hotel & Casino Online or Harrington Gaming Online.

To play at any of these casinos, players must be 21 or older and physically live in Delaware. The casinos check player IP addresses, so players residing outside the state cannot sign up. All land and online gambling matters are overseen by the Delaware State Lottery Office.

Although there are currently only three states in America that have passed laws to regulate and tax their online gaming industries, there are two other states that seem poised to follow suit. These are listed below with their current online gambling status:

In 2016 a pro-online gambling bill was very close to being signed into law in the US state of Pennsylvania but ultimately stalled when the state Legislature’s upper house ran out of time to vote it through before the year end, to the disappoint of remote gaming fans.

Despite a renewed effort to vote the bill through in early 2017, it was yet again stalled, with hopes fast fading it will go through. That said, online gambling proponents are hopeful the latest bills – HB 392 (for the House) and SB 477 (for the Senate) may be just the ticket.

Both are aimed at boosting the state’s gaming industry overall, as well as generating much-needed funds via taxable online gaming revenues. The bills have a good chance provided they can allay fears that online gambling could cannibalise land gambling offerings in the state.

Many optimistic online gambling industry insiders are full of confidence that these bills will be passed before the end of 2017, but only time will tell.

California doesn’t have any pro-online gambling laws, which means that remote gaming is not licensed or regulated, despite a long-standing call from supporters of online gambling, particularly online poker, to introduce them.

One of the many ‘roadblocks’ on this issue is in the form of resistance from a few of the state’s Native American tribes that own and operate land casinos. They’re afraid that legalising online gaming would hurt their businesses, and they’re probably right.

Despite these roadblocks, Assemblyman Reginald Jones-Sawyer introduced online poker bill AB 1677 in February 2017 as a starting point for online gaming legislation. In it, he proposed that prospective operators must pay $12.5m for a 7-year license.

To date, the bill has not been signed into law so be sure to watch this space.

Get your September off to a rocking start by enjoying these great welcome bonuses from the below casinos. As always, we’ve sourced only the finest new no deposit casinos with some of the hottest no deposit bonuses around...

Choose from these 5 new no deposit bonuses and claim free casino credits and free spins just by creating an account. Come back next week and you will find even cooler no deposit bonus codes and welcome bonuses as...

Top 5 United States No Deposit Bonuses In May 2020

Americans like things bigger and better and our players show this trend in the way they choose USA no deposit bonus codes. These five casinos listed below offered some of the hottest bonuses to our players in May and...