This casino does not accept players from United States

Click here for casinos that accept players from the United States

50 no deposit free spins on "Achilles".

The Dinkum Pokies platform is made for the dinkum (real) Aussie pokies fan, as the name lives up to the service of offering slot titles for the most part. This online casino platform is a rather recent release, with its beginnings at the early beginnings of 2018, which is why it is often considered target of criticism, as the design and overall layout appear as something dating a few years back.

Still, while players do prefer those online casinos which tend to have the most agreeable appearances, there is still something that goes beyond a pleasant exterior – player safety and information security. Namely, the game software and general platform policy is fully licensed and regulated by the suitable Curacao government authority. What is more, the entire platform is regularly tested and proven fair, especially their Random Number Generators, by reputable third-party companies.

To round things up, this operator has also employed the final industry security standard – 128 bit encryption, making all incoming and outgoing data completely unintelligible to intruders of all kinds.

How to Use No Deposit Bonus Code at Dinkum Pokies

While the Dinkum Pokies website is somewhat criticised for having a less contemporary look, it is definitely functional to its purpose, toppling this issue by a distance. Due to such circumstances, players should not expect to have any issues using bonus or promo codes at the website.

Starting from the initial no deposit bonus, all players need to do to obtain the relevant code is to register for an account by entering basic personal information. Having made their initial deposit, players will become eligible to a whole different set of promotions and bonuses.

In order to distinguish between them, and the players claiming them, this operator has designated a bonus coupon code for regular claiming. Once you obtain the code for the promo of your choice, all you need to do is enter it in the clearly designated box and follow up on the remaining procedure, usually by confirming your information – it is as simple as that.

The games at Dinkum Pokies are ‘dinkum pokies’, meaning that the game selection at this platform really lives up to the Aussie-specific name, being made for slot lovers in particular. This is all the more understandable once you learn that the exclusive software provider for the overall platform and game titles is Real Time Gaming, a software company known for their slot offering.

The site’s lack of multiple filtering options may be considered a disadvantage when trying to make the most of the massive RTG game base provided straight onto the platform. Other than the alphabetical ordering and the top games option, the RTG titles are also categorized by their type of game play. As such, they distinguish between several types of pokies in particular – classic, video and jackpot, as well as roulette, blackjack and other table game action, alongside additional miscellaneous game titles.

Poker is also present on this platform, both as electronic video poker and through a few of its table variants, such as Caribbean Stud, the largely popular Texas Hold’em, 7-Stud, Pai Gow and more. What does seem to lack at this platform’s game selection is a live dealer casino game feature, and considering the site’s focus on the Real Time Gaming offering, it is bound to remain this way for quite some time.

The site currently features about a dozen progressive jackpot slot titles, each offering their prize pool straight from the website or through the downloadable client. This section of the game selection features popular Real Time Gaming titles which span across multiple operators in order to build up their jackpot amounts from as many player pools as possible.

One shortcoming which may be able to put players off of engaging in this progressive jackpots slot selection is the fact that no specific jackpot amounts are stated on the webpage. The designated space features titles and their specifics, but the operator should also consider explicitly stating the amount for individual titles in order to provoke interest and promote transparency at the same time.

While the game selection provided from RTG may have some inconsistencies in terms of game variety, it is definitely not the case when it comes to platform optimization. First of all, the site itself is accessible via desktop computers and laptops in one of two ways – as an instant-play browser version or as a downloadable app. Should you choose the latter, you need to know that the initial download is of the site shell, so that players can select individual titles as they move through the selection.

As for mobile devices, smartphones and tablets alike, the situation is all the same, as players can choose to download the app or access it through their mobile browser software. These options are proven to function best on Android and Windows Phone mobile devices, mostly thanks to their HTLM5 format. However, more distant releases featuring the Flash format may pose some issues in specific situations.

Dinkum Pokies as an online casino offering real money game action needs to have a suitable and functionally equipped banking section. In this regard, the methods differ when it comes to the various transactions – namely, the site offers quite a few deposit options, while only three distinct withdrawal processing services.

Out of the selection listed above, Neteller, Skrill and bank wire transfers are the only three services which can be selected to meet your withdrawing player needs. The first two can be selected as a universal payment method, performing both types of transactions. While deposits are instant across all banking methods, withdrawals via Skrill and Neteller are processed in a 2-24 hour time frame, while the bank wire transfers take 2-15 days at a time.

Dinkum Pokies has a solid FAQ base that is able to address most general player inquiries from several different aspects of the service, but their urge for player satisfaction has resulted in the introduction of additional contact options. Players at this platform are able to seek assistance via live chat, email or an instant contact form straight from the website. 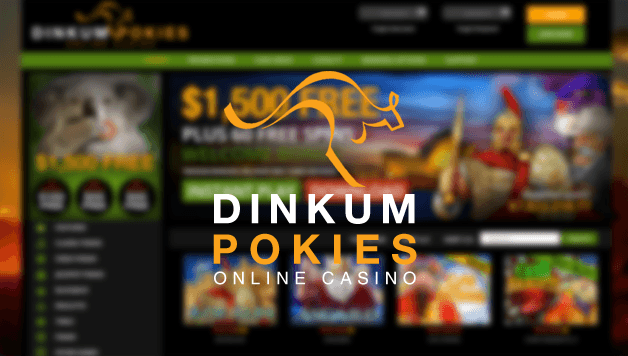 Enjoy these that will give you loads of free spins and free chips to check out a number of new online casinos and their extensive gaming portfolios. Don’t forget to check...